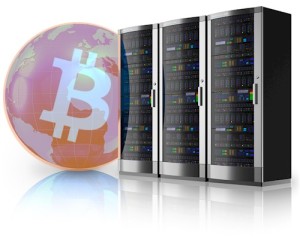 VPS Hosting Bitcoin – Over the past several years, technology has integrated itself to people’s activities and now plays a big role in everyday life. Bitcoin and Virtual Private Servers are among some of the most used online services.

In recent years, a popular trend has been growing that led to more services accepting Bitcoin as payment. Despite the history of Bitcoin and its unstable price, companies are now accepting Bitcoin payments as it is now more stable and is still growing in popularity. Virtual Private Server providers are also slowly including this crypto currency as one of their payment methods.

Although Bitcoin became viral for a small moment in time, it is not known by everyone. Bitcoin is an online payment system where its units of account (bitcoins) is kept in a virtual ‘wallet’. The online currency is often referred to as a decentralized virtual currency because it is not being controlled by any private company, central bank, or third party, but by its own peer-to-peer network. This platform takes a unique approach to generating the currency through a method referred to as “Bitcoin Mining”. Users mine for bitcoins by allowing their computer to verify and record payments into a public ledger called “the block chain”, after which users will receive coins as a reward.

Virtual Private Servers, commonly known as VPS, are only used by some people. VPS’s are virtual machines that run operating systems similar to those that run on PC’s. A user is given full access to the VPS where he or she is free to install any software, and perform any task you would on a regular PC. This type of service provides many benefits, such as the flexibility to use any operating system on a hired machine, thus reducing the cost of having to acquire an extra PC. Upgrading your virtual machine to something better is less costly as well. VPS’s are often used to host small or medium sized websites.

Virtual Private Server providers have seen the potential of Bitcoin as a payment method and have started to implement it. Consumers simply send bitcoins to the provider’s wallet, and that’s it; no third party needed. Some providers might use Bitcoin Payment Processors, such as BitPay or Coinbase, to convert part or all of the payment automatically to local fiat.

Bitcoin is now one of the few solutions out there that provide a means of online payment through a decentralized, secure, digitized currency. There have been several other types of digital crypto-currencies, such as Litecoin, but Bitcoin provides the biggest network effect by far, which provides security and long term vision to the platform. The popularity of crypto-currencies in general could result in more payment methods based on the block chain technology in the near future.